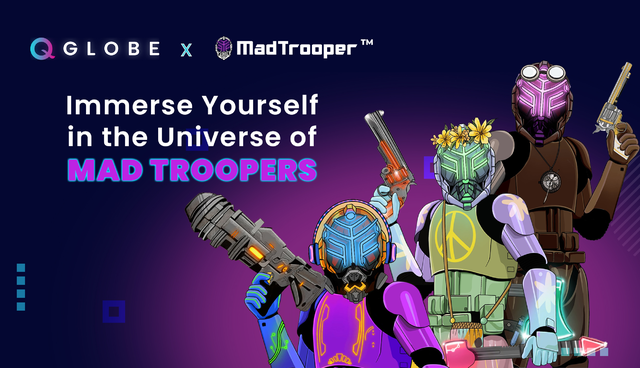 QGlobe x Mad Tropper: Immerse Yourself in the Universe of Mad Troopers

QGlobe is the gameway for high quality IP and content to onboard into the web3 community. QGlobe is the agency focused full-service launchpad and accelerator for distribution across GameFi and most importantly, metaverse projects. It sits at the intersection of gaming and culture. As was proven with some traditional agency accidental rug pulls, traditional Madison Avenue agencies come up with creative, financing, deployment, yet miss the target of support from the web3 culture and community.

QGlobe provides SaaS products, web3 ads, growth, community on demand, whitelabel secondary marketplaces, full-service support in product development, marketing, tokenomics, contract auditing, creative aspects, blockchain advisory and many more elements pivotal to the growth of web3. It also offers vetted projects a successful early fundraising round called an IGO (Initial Game Offering) onboarding ramp. So, it does not matter whether you are an individual interested in floor-level opportunities, or a project stakeholder in dire need of funding to flourish your business development work, QGlobe platform serves you both ways.

Mad Tropper has been introduced by the team behind the EDDASwap, a leading multinational chain of NFT and Defi platforms. Having proven experience and an established track record in the NFT space, the team behind the Mad Troopers consists of highly skilled NFT artists, developers, and most importantly digital art connoisseurs.

This is how you can immerse yourself in the universe of Mad Troopers. Let’s jump on this roller coaster journey by buying your own Mad Tropper NFT on the Solana blockchain by going to Magic Eden and picking up a few NFTs off the floor now. You will surely be able to join the grand battle that will ultimately decide your life endeavors in the metaverse and beyond!

After QGlobe’s thorough research, QGlobe analyzed Mad Tropper’s unique value proposition is different in the quality of the metaverse, game play, and reward incentives, not to mention the outstanding team’s track record. The QGlobe selection and qualification process is generated algorithmically to seek special attributes and traits that are also validated by the OGQG alpha investor club of 100 exclusive members.

CEO and Founder of EDDAverse and Mad Trooper the game said, “the benefits of moving forward with QGlobe became immediately obvious and we are so glad that we decided to sign up for these services. As game developers we didn’t see the whole picture entering crypto and blockchain gaming for the first time, but after going through the QGlobe accelerator program we quickly understood the return on our investment and their investment in us. We would not have achieved our current numbers without them. This was reflected in the social media followers we gained and engagement that boosted our user count and brought validation through the response we got from exchanges and marketplaces. MadTrooper is already on 4 marketplaces now. QGlobe brought our holders additional utility, helped boost game NFT sales that brought us more revenue than we would have been able to produce without them, in the end they saved us time and money, and I’m constantly recommending QGlobe to other game studios I know!”

Hidden within the Mad Trooper army are a few mythical warriors. These are more powerful and a bit crazy you say when compared with other traditional Mad Troopers.

Mad Tropper partnered with QGlobe to elevate NFT distribution to web3 users, traders and digital art collectors. Meanwhile, QGlobe is the launch pad for the initial game offerings. It works as an accelerator to help, build NFT games and the impactful metaverse.

QGlobe was founded as a marketplace to support early-stage developers for blockchain projects. Meanwhile, NFT experts claim that this is the first blockchain game launch pad to focus specifically on agencies that understands the needs of the brands, celebrities, and artists, and is growing in the MetaFi space.